One of the highlights of Burning Seed this year was seeing Red Earth Ecology establish itself on the paddock.

Jo’s been developing this project for years, undertaking activities around Matong and introducing Burners to the local ecology.

I’ve seen the crowds for her bush walks grow and in that time she’s been joined by a number of people with expertise — particularly Brian Jones, Ash Blackwell, Diego Bonetto and Peter Ingram.

There’s a good level of interest from visitors wanting to know more about the environment in Matong State Forest and many years have seen additional walks added to the program.

This year we were awed to see around 60 people show up for the walk.

It was also exciting to see Jo’s art project start to take shape this year, after she struggled last year before being taken off site in an ambulance.

GEO//GRAPHOLOGY uses the Cut-up Technique to reveal hidden meaning from local histories and, as someone who has worked as a curator at a local museum, I feel there is a need for a fresh perspective in this area.

Orwell famously wrote that “history is written by the winners” and it’s increasingly clear to me that reconciliation in Australia will require a truth-telling, much like the hearings that took place in post-apartheid South Africa. 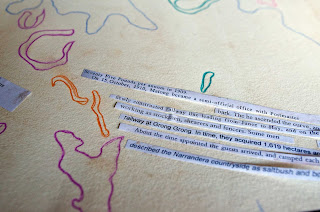 Jo has been using the Cut-up Technique in local exhibitions for a number of years and it suits her conceptual approach to art-making.

It’s a great way to review and reinterpret historical narratives, hopefully prompting a reevaluation of meanings drawn from records — which at times used euphemisms to hide the extent of the Frontier Wars in the Riverina.

That’s a small part of a much bigger picture but an important one given the Wiradjuri drove almost all the Europeans out of the area west of Ganmain in the mid 19th Century.

Jo’s activity of selecting fragments from histories and pasting them together is a social one. 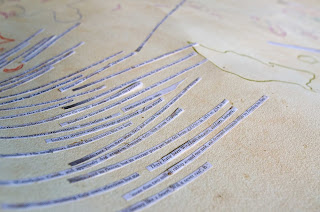 Really enjoyed being part of the conversations and making art with friends.

Looking forward to seeing Red Earth Ecology continue to develop on and off the paddock.